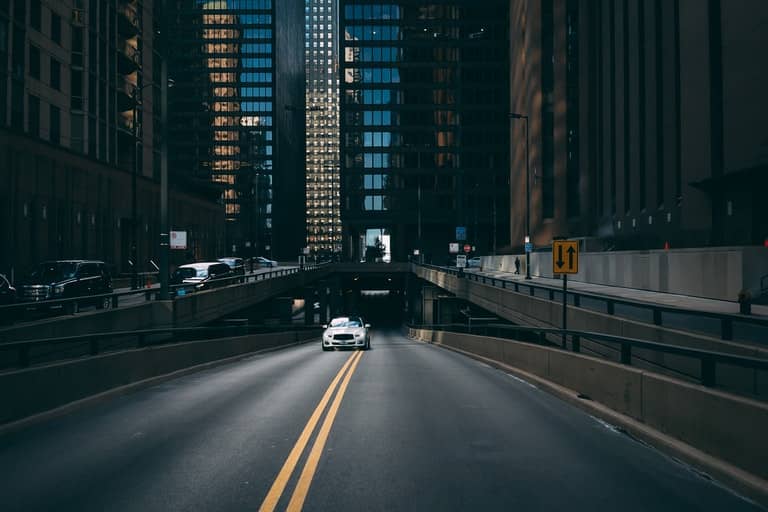 Is Lane Splitting Legal In Georgia?

Motorcycles and cars can share the road safely, but there’s no consensus on the best way to do this. Drivers are often startled or annoyed when a motorcycle passes between them and the adjacent lane. This feels unsafe, even though motorcyclists are often doing it to prevent being caught in stop and go traffic that increases their risk of being hit from behind. Georgia drivers might be wondering, “Is lane splitting legal in Georgia?” While the maneuver is not legal in Georgia, it’s important for drivers to understand what it is and why it happens.

What Is Lane Splitting?

Lane splitting is when a motorcyclist rides between two rows of moving cars going in the same direction, essentially using the white dotted line that separates the two lanes as their own extra lane. In California, where this maneuver is legal, authorities recommend that motorcycle riders don’t go more than 10 mph faster than the cars they are passing.

A similar concept is lane filtering, in which a motorcyclist passes cars that are stopped or moving very slowly. The difference between the two is the speed of traffic when they take place. Filtering happens when traffic is at a standstill, while splitting takes place at faster speeds. Filtering allows motorcycles to move to the front of the line at an intersection.

While both of these maneuvers might seem dangerous, research shows that they’re actually safer than the alternatives. Researchers at UC Berkeley found that lane splitting reduces the risk of motorcycles being hit by cars from behind. Motorcycle riders who split lanes were more likely to be wearing full-face helmets, less likely to have been drinking alcohol and more likely to be driving at slower speeds than those who do not. These behaviors are all associated with responsible, safety-conscious riding, which indicates that lane splitting is not usually done out of a reckless urge to move faster.

Another similar term is lane sharing. This is when two motorcyclists ride next to one another in the same lane. It is legal in most states.

Is Lane Splitting Legal in Georgia?

Regardless of any safety benefits, lane splitting is not legal in Georgia. Georgia code § 40-6-312 specifically prohibits motorcyclists from driving between rows of traffic. This means that a motorcyclist is more likely to be considered at fault if they are involved in a car accident while lane splitting. However, other factors might still be considered, like how fast the motorcyclist was going in comparison to the flow of traffic. If the car involved also did something dangerous, like changing lanes without signaling, liability might be shared.

Lane filtering is also illegal in Georgia. Lane sharing, however, is allowed. Two motorcycles can ride together in the same lane, but no more than two. Georgia considers this the exception to the law requiring motorcycles to have use of the entire lane.

What About Other States?

Georgia’s ban on lane splitting is the norm nationwide. However, lane splitting has been legal in California since 2017. Lane filtering was recently allowed in Utah. Several other states, not including Georgia, have introduced bills to allow lane splitting under certain conditions.

What Other Motorcycle Safety Laws Do Georgia Drivers Need to Know?

People driving cars on the road with motorcycles need to allow the motorcycle to use a full lane. Drivers should be aware that lane splitting happens, whether it is legal in your state or not, and pay extra attention to where motorcycle riders are in relation to their own vehicles. Most of the danger involved with lane splitting is when other drivers aren’t expecting a motorcycle to pass so close to their vehicle.

For motorcyclists, wearing a helmet is required. Motorcycle riders also need some type of eye protection, which can either be a windshield on the motorcycle or a full-face helmet. Georgia law also requires them to wear shoes while riding and to keep both hands on the handlebars. This means not holding or carrying anything that would prevent holding the handlebars properly. Headlights and taillights need to be turned on for visibility. Finally, a second person can’t ride a motorcycle if the motorcycle wasn’t designed to hold two riders.

Otherwise, motorcycle safety is similar to driving safety in general. Riders need to be aware of what other drivers are doing and follow the speed limit. They also need to be especially careful of avoiding drivers’ blind spots. Even if a motorcyclist believes that lane splitting is safer, they need to avoid doing it in Georgia and other states where the practice is illegal.

While lane splitting can be safer if everyone knows what to expect, it is a type of illegal driving in Georgia. If you’ve been injured in an accident involving illegal lane splitting, an experienced personal injury attorney can help you get compensation.