Talk to a lawyer
90+
reviews

Get an HONEST & FREE case review

We charge NO upfront legal fees

You don’t pay until we WIN

“It’s incredible how your entire life can change in an instant. One minute, I was minding my own business, and the next minute, a distracted driver turned my world upside down. Because of someone else’s negligence, I’m unable to work, and I’m facing thousands in medical bills. The insurance company offered a small settlement that doesn’t come close to covering my expenses”

Were you recently injured in a pedestrian accident, car crash, or motorcycle accident? You may now be scared and confused as you try to figure out your next move. If the accident wasn’t your fault, you deserve to be compensated for your pain and suffering. You might be eligible for compensation even if you were partially at fault.

Our experienced Alpharetta personal injury lawyer can recover your current and future medical expenses, lost wages, and other costs associated with your injury. You have a limited time to make your claim for compensation. To ensure the best possible outcome, get started today.

How Much Is Your Personal Injury Claim Worth?

Has the insurance company already made an offer to settle? Before signing anything, seek guidance from an Alpharetta personal injury attorney. Insurance companies make money by paying out as little as they can get away with. Without legal advice, you may unknowingly agree to an unfair offer or accept far less than your claim is really worth.

After a FREE case review, you’ll get our honest expert opinion on the viability of your case and the type of compensation you can expect to receive. Many factors will influence the amount of money you can recover:

THE INJURY LAW TEAM THAT CARES...

Do You Have a Case?
The Parisi Law firm was very professional, there was great communication, they kept me informed every step of the way and explained the process in great detail. I received a settlement and received every dollar I was entitled. Thanks Jerry and Cheryl, great job!
Mark

My experience with this lawfirm was completely positive. They handled my case very well from start to finish. I was very satisfied with the settlement that I received.
Linda

Jerry Parisi handled all details of my auto accident case. Honest and a great communicator, he thoroughly covered all details and strategies, making it a pleasure to work with him. I trusted his advice and was pleased with the settlement. I highly recommend Jerry Parisi.
Wayne

A car accident is one of the most common causes of life-altering injuries. In the state of Georgia, Fulton ranks as the county with the most crashes year after year. In 2016, there were over 60,000 crashes in Fulton County, which accounted for 13% of the total accidents in the state for that year. This number has steadily risen over the last few years, with 2021 seeing over 65,000 accidents.

What’s causing this increase in traffic accidents? Negligent drivers put others at risk in many ways.

Driving Under the Influence (DUI)

When an intoxicated person gets behind the wheel, they’re endangering themselves and everyone else on the road. Alcohol seriously impairs a driver’s ability to safely operate their vehicle, which often leads to disastrous consequences. For someone weighing 140 pounds, four bottles of beer may be enough to reach the legal limit of 0.08% blood alcohol content.

If you were injured in an accident caused by a drunk driver, you deserve to be compensated for your pain. DUI personal injury cases tend to be more straightforward since it’s easier to prove that the defendant was negligent.

Drivers speed for many reasons. Some do it for the thrill or the fun, while others are simply running late for a meeting. Regardless of the reason, exceeding the speed limit is a clear sign of negligence and recklessness. Injuries caused by speeding accidents tend to be more catastrophic in nature and may require surgery or long-term care. Contact a knowledgeable Alpharetta personal injury lawyer to start seeking the compensation you deserve.

Most car accidents happen at intersections. When drivers disobey a stop sign or run the red light, they can cause serious harm to pedestrians and other drivers. If you were injured because a driver disobeyed a traffic signal, contact an attorney to begin the process of seeking compensation. Many intersections are monitored by CCTV cameras, which can be instrumental in proving the driver’s negligence.

What Can an Alpharetta Personal Injury Lawyer Do for Me?

Do you really need a lawyer to handle a personal injury claim? You may already be in discussions with the at-fault driver or their insurance company, so is a lawyer truly necessary?

Remember: the insurance company hires attorneys, adjusters, and claims officers to protect their best interests. Who’s on your side?

When you reach out to an attorney at Parisi Injury Law, you’ll have a fierce advocate who can push for the best possible outcome on your behalf. Without the guidance of an attorney, you may be pressured or tricked into an unfair settlement. It’s not uncommon to accept an offer and later find out that you were entitled to so much more. Don’t let this happen to you.

An Alpharetta personal injury lawyer will ensure you have all the information you need to make the best decision. We’re here for you at every stage of the process.

Seek Compensation As Soon As Possible

If you were injured because of someone else’s negligence, don’t hesitate to take action. If you don’t settle the claim or file a lawsuit within two years of the accident, you may lose your right to seek compensation.

Start the process by scheduling your FREE consultation today.

Latest from our blog 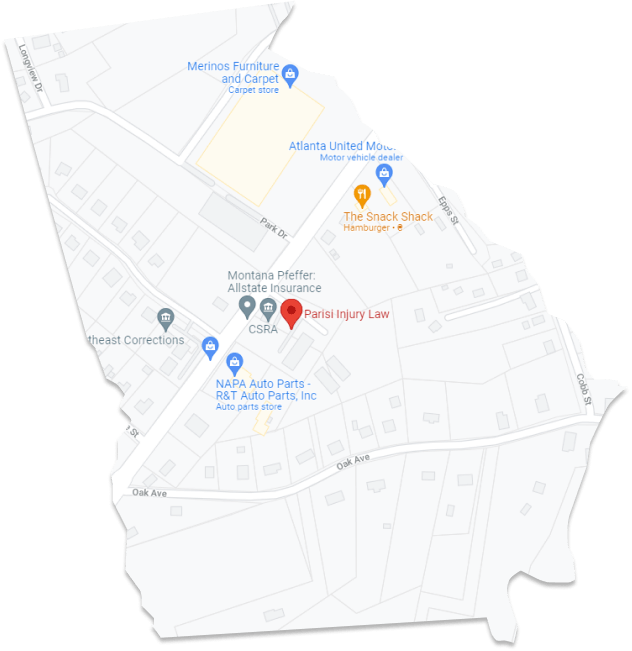